(This page still under development)

About 15 B.C the Roman architect Vitruvius designed a vertical water wheel, that though a gearing system, would utilize the energy of flowing water to turn a pair of horizontal stones.  This is said to be the beginning of the watermill.   These mills were mankinds first machines and for the next 2000 years they were the essential design in the development of power. Dating back to the 10th century windmills first appeared in Persia.  The first known picture was of the Windmill Psalter about 1290.

By the end of the 18th century Europeans had developed the use of these machines into a highly developed craft.  It was the watermill and the windmill that provided the energy necessary for Europeans who immigrated to the New World to survive.  These mills ground wheat, bran and barley into flour for food, spun wool for clothing,, made gun powder for guns, sawed trees into lumber for housing and provided irrigation for farmlands.  The mills were the means by which these people were able to establish themselves as independent of the homeland.  They have stood as the symbol of colonization in the New World for centuries.

It was the primitive principles of the windmills that led engineers to formulate the basis of modern aerodynamics.  The sail of the windmill anticipated the design of an aircraft propeller. The millwrights primary concern was efficiency.  For them, form very definitely followed function.   These engineering marvels, listed on the National Register as Historic Treasures, now stand only as curious and fascinating monuments to pre-industrialization.  They are among the few out- representatives to a very beautiful period in history.

The integrity and respect that they deserve is expressed in a simple statement by former Secretary of the Interior, Stuart Udall.

Windmills are much more than relics.  They are symbols of sanity in world that is increasingly        hooked on machines with an in ornate hunger for fuel and prodigious capacity to pollute.  Ecologically, the windmill is one of the few perfect devices.  It harnesses a complete free resource to pump water or generate electricity under conditions that respect the laws of nature.

Nine of these rare structures still stand on the east end of Long Island and is considered one of the largest concentrations in existence.

Commonly known as the Bridgehampton Wind Mill, this mill was constructed for Jason Beebe on his Sag Harbor farmland in 1820 and is representative of Lincolnshire millwrighting. It stood on a prominent hill near Spring and Suffolk streets and was the last windmill to be erected on eastern Long Island. Aside from milling it functioned as a signal station for the whaling ships entering the harbor. It was known as the " Flag on the Mill, Ship in the Bay" mill. In 1837 it was acquired by Abraham T. Rose and Richard Gelston. They moved it to the "Mill Hill" in Bridgehampton. By 1882 when it was sold to James A. Sandford it had changed hands six times. Sandford relocated it near the railroad station where steam power was installed.

Mr. Kennedy, a New York City Park Commissioner, purchased it for Prospect Park in Brooklyn. Unable to move it to Brooklyn , Sandford kindly took it back. In 1894 the mill was sold to Oliver Osborn. A year later in 1095 the Bridgehampton Milling Company was formed. This group, with John E. Sayre as manager and William Schellinger as miller, operated the mill till March 1911.It was then that the mill lost a sail during a storm. In 1914 Rev. Robert Davis who in a short time sold it to Mr. J. E. Berwind purchased it. Mr. Berwind, also of Bridgehampton, moved it to his estate where it stands today. The Beebe Mill is one of the rare windmills that have the Ogee or Turks Head cap. This type of construction is very similar to those found around Lincolnshire, England.

Part of the collection includes thirteen glass plates of eastern Long Island's famous windmills, with the Gardiner's Island windmill built in 1795. Some mills were in service during the American Revolution, the golden age of whaling (which was America's first major economic resource), War of 1812 and the Civil War. Eastern Long Island is host to one of the largest concentrations of historic English smock windmills in the world which have been preserved with pride as historical and architectural treasures. Tooker seem to recognize the windmills were symbols of independence from the homeland and were the nucleus and lifeline for all colonial communities by producing staples such as flour and gunpowder. He must have realized the industrial revolution would soon replace the great structures with machines to mill the flour and wanted to photograph them for posterity. Considering the dynamic influence windmills have made in the development of world cultures and civilizations, the Tooker photographic windmill images as an intact collection are rare and invaluable.

The Wreck of the Fanny J. Bartlett 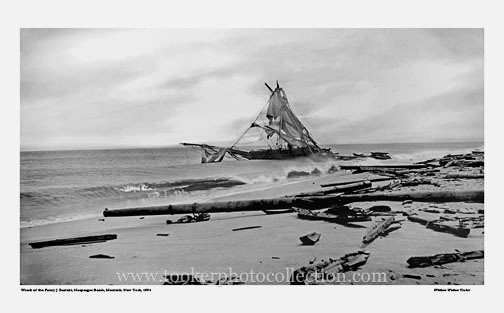 Copy of article as written regarding the Fanny J. Bartlett shipwreck as it appeared in the New York Tines January 17, 1894

The   Pilot  boat Joseph F. Loubat  and a

The crew of the Napeague Station re­sponded to the alarm. The crew were taken in a lifeboat  by the Amagansett crew. The boat will be hauled off without much trou­ble unless a gale sets in from the east or south. A. wrecking company was called upon early this morning for assistance.

During the dense fog this morning the large schooner Fannie J. Bartlett, in charge of Capt. A. J. Hutchings, ran on the outer bar, two miles west of Hither Plain Life Saving Station. The station crew responded to her signals of distress, and launched their lifeboat.

Though the vessel was in no apparent danger, the crew and Captain wished to be taken off and landed. Capt. Hatchings says that he was deceived in his bearings, and ran ashore through miscalculations.

The Fanny J. Bartlett Is loaded withcoal, bound from Philadelphia to Boston. Her cargo is partially insured. The vesselis valued at $20,000. She will be gotten off unless a storm sets in. Capt. Hutchings and crew are on the beach opposite the wreck. The Merritt Wrecking Company has been notified.

PAINTING OF THE FANNY J. BARTLETT  February 2012 BY MICHAEL LANDI BASED ON A PHOTOGRAPGH BY WILLIAM WALLACE TOOKER AT NEAPEAGUE BEACH IN MONTAUK, NEW YORK 1894. 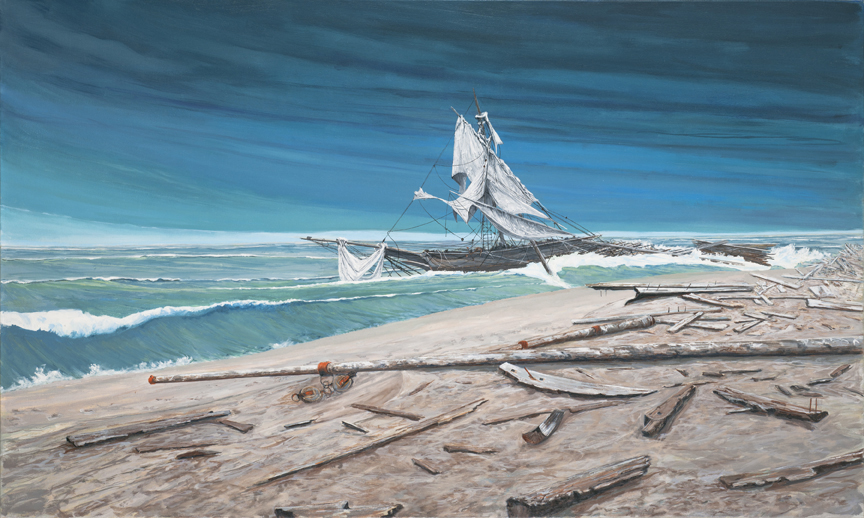 Possibly the most impressive image, and of high quality and historical significance, is entitled the Beached Whale dated 1891. The whaling industry was America's first real economic resource but was winding down when this image was taken. The photo portrays six men and two young boys, from distant and distinct cultures, about to dissect a 90-foot Finback whale. For many generations beached whale-harvesting permits were issued by the local jurisdictions as an economic resource. The photo seemingly portrays a businessman of European descent who may have acquired a whaling-harvesting permit that  probably hired a whaling crew to harvest the whale. Whaling crews were usually make up of local Indians who by that time many had inter-married with African-Americans. As a tradition, which still exists today, the Indians cut off the fins and tails for themselves. The photograph is a unique one of a kind American portrait that reveals the co-existing relationships of very diverse cultures. 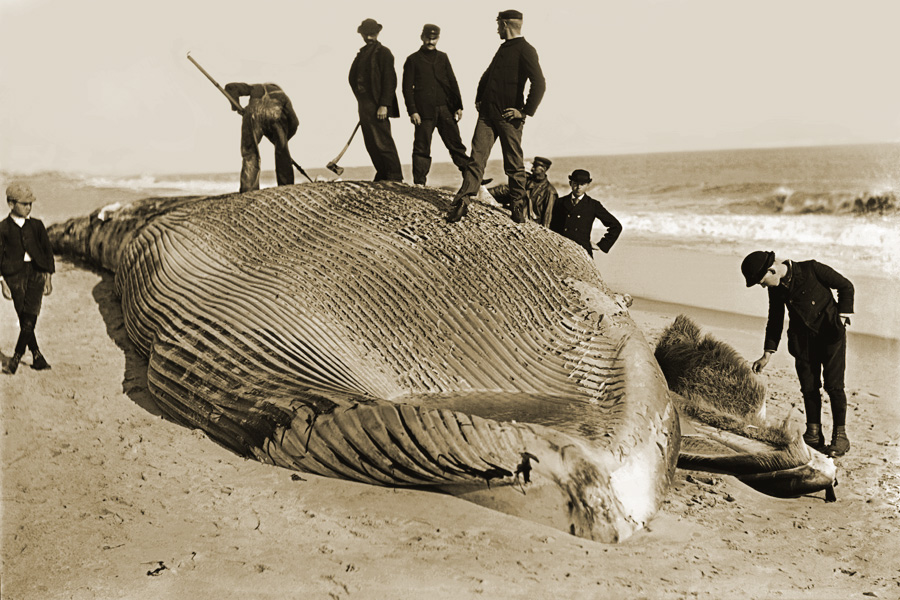 For more information about the history whaling in America follow link below to Levithan by Eric Jay Dolan who granted permission to link a You Tube video to this website.

The Montauk Lighthouse circa 1882

After America's independence immigration and trade flourished in the Mew World. New York harbor soon was established as the major port of trade. The new administration, realizing the importance of safe navigation, passed a bill to construct lighthouses along the northeast coastline. In 1796 the first tower was erected at Montauk Point. As ships approached the American coast the Montauk Lighthouse was the first evidence that America was now an independent trading nation. For "nearly a century, it stood as a symbol of the successful colonization in the New World that was only upstaged by the Statue of Liberty in 1886.

On April 12,1792 a bill was passed in Congress to build a lighthouse at " Montock" Point. Turtle Hill, a name given by the Indians was the sited sleeted by Ezra L'Hommedieu. The parcel was purchased by the government from a group of people who jointly owned the land for $250.00. H.P.Bering of Sag Harbor negotiated the sale transactions and the deal was closed October 19, 1795. Tench Coxe,Commissioner of the Revenue,approved all plans and contracts on November 25, 1795 and was officially authorized by George Washington on January 4, 1796. A contract bid of $22', 300.00 was awarded to John McComb of New York, the builder of the Cape Henry Light­house in Virginia. Importing redstone from Connecticut, the first stone was laid June 7, 1796 and construction was complet­ed the following November 5th.

The tower was located 130 yards from the mean high water and 297 feet from the edge of the cliff. The first light, elevated 150 feet above sea level, was fueled by strained sperm whale oil. The beacon remained steady until 1853 when a flashing Fresnal light was misplaced at New York Customs and sold at auction for $60.00. When finally located the owner was delighted to sell it to the government for $900.00.Addit­ional construction to enlarge the tower was completed in 1860 for a cost of $11,000,00.